Taking It On The Road, Travel Technology 2013

I spent much of this year mountaineering in Europe, and re-visiting India after 34 years. Since my father's passing earlier this year, I've been free to travel again. My father was my chief technology influence. People often ask how I got into technology, since my education was in psychology and most of my career was in tourism. It was all due to my father, Lucian J. Endicott Jr.,who worked nearly three decades for IBM, and then became a professor of computer science before retiring altogether.

On this journey I've been watching closely to see what technologies I find most useful. Unlike most of the young people traveling today, I'm not traveling with a phone. I did have an Apple iPod Touch for awhile, which I enjoyed, but passed it on in favor of the new Google Nexus Android tablet. I find phones and tablets great for everything other than real work, like programming. I did buy the most economical, top rated Consumer Reports laptop for students, and have been very happy with it.

A man can only travel with so many devices though; so, the Apple iTouch and Android tablet both went to nieces, and I'm still happily traveling with my affordable laptop. In both Europe and Asia I have found locally available, prepaid "data cards" or "dongles", basically a phone chip on a USB stick, very helpful for freeing myself from dependence on wifi. However, some of the new, higher end phones come with built-in wifi "hotspot" capability, which I've seen quite a few young people using with their laptops. Without a phone per se, Skype has proven super convenient, especially premium Skype to local landlines and SMS, for literally calling from anywhere to anywhere.

I have to say that I use Skyscanner a lot, and feel it's saved me a tremendous amount of money. The only caveat is that some of the smallest new budget airlines are not included. For accommodation, I have tried both Couchsurfing and Airbnb for the first time this trip. I've actually found Couchsurfing more useful for meeting interesting, colorful people at my destinations than for easily organizing free overnights. I have also been surprised by the amount of people running accommodation operations under the radar via Airbnb, rather than truly private persons renting spare rooms, though I've been satisfied with the service.

Problematic as it may be, I do find myself using Wikitravel precisely because it provides less information rather than more. I like Wikitravel because it gives me a really quick overview of the high points, what to see and do, even for out of the way destinations. I sometimes download the entire page for offline reading, when there is no wifi available. I find both its strongest and weakest points are accommodation. Strong because anyone can add to it, so often gets places under the radar, and weak because it's totally unorganized and un-rated. Because of this deficiency, I find myself often referring to TripAdvisor reviews to double check the lower end accommodations.

Another relatively new technology I'm using a lot is Google Maps, of course frequently for directions, but also particularly for the "Search nearby" capability. I find Google Maps Search nearby capability delightful for discovering new places of all kinds, many perhaps never visited by tourists before. Especially in India directions should be taken with a grain of salt, because places usually seem to be "pinned" imprecisely, so caveat emptor. I find screenshots great for capturing Google Maps directions, easily cut and paste with the "prt sc" key for convenient offline reading.

More than ever before, travel for me is more about people than places. These days I love to visit with friends, old and new, at home or abroad. The reality is that people are now using Facebook more for personal communications than email. Facebook even makes it easier for people traveling in the same regions to meet up along the way. Another reality is that places, particularly low end places, are as likely to have Facebook pages as websites, essentially turning Facebook into its own parallel universe – no other Internet required. In fact, I only use Facebook for people, places/pages and events – and no other bells or whistles, such as innumerable travel apps, etc. 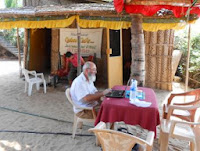 It was Facebook (and my nieces) that finally made me break down and get a small camera (Nikon Coolpix) for posting travel snaps as I go along, often the same day. Though that could be the number one use for phones I'm seeing on the road, not only for taking pictures but also for uploading them in virtual realtime….

Posted by Marcus L Endicott at 16:41 No comments: