How Many PlayStations Make A Watson?

"The words are just symbols to the computer. How does it know what they really mean?" - David Ferrucci
IBM Watson is IBM's project to create the first computer that can win the TV quiz show Jeopardy when pitted against human contestants, including the record holder for the longest championship streak, Ken Jennings and the current biggest all-time Jeopardy money winner, Brad Rutter. The resulting computer will be a contestant on Jeopardy next month, February 2011. I will try to give an overview here of what is known to date about IBM Watson from open sources. I'm writing this as much for my own learning as any other reason; so, give me a break if it gets a little fuzzy in the complicated parts, besides IBM is not playing all their cards. Of course, I welcome any and all comments, corrections and clarifications. BTW, in the spirit of full disclosure, I am a so-called "IBM brat" having grown up in an IBM family; my father @ljendicott worked for IBM, 1960-1987.
According to the IBM DeepQA FAQ, the history of Watson includes both "Project Halo", the quest for a "digital Aristotle", and AQUAINT, the Advanced Question Answering for Intelligence program. In fact, David Ferrucci, principal investigator for the DeepQA/Watson project, has four publications listed in the AQUAINT Bibliography. The earliest version of Watson was a trial of IBM’s AQUAINT system called PIQUANT, Practical Intelligent Question Answering Technology, adapted for the Jeopardy challenge. Another question answering system, a contemporary of PIQUANT called Ephyra (now available as OpenEphyra), was used with PIQUANT in early trials of Watson, both by IBM and their partners at the Language Technologies Institute at Carnegie Mellon University (who are jointly developing the "Open Advancement of Question Answering Systems" initiative). One of the things OpenEphyra can do that Watson doesn't do at the moment is retrieve the answers to natural language questions from the Web.
IBM Watson is not a conversational intelligence per se, but rather a question answering system (QA system). It is fully self-contained and not connected with the Internet at all. Watson does have an active Twitter account at @IBMWatson, but it is operated by a group of Watson's handlers (using CoTweet). Watson has no speech recognition capability; questions are delivered textually. It does not have autonomous text-to-speech (TTS) capability: TTS must be triggered by an operator (ostensibly to avoid interruptions to the television performance). New York Times readers have tentatively identified the voice of Watson TTS as that of Jeff Woodman. Presumably, an IBM WebSphere Voice product is being used for Watson TTS.
The distinctive "face" or avatar of IBM Watson, about the size of a human head, expresses emotion and reacts to the environment. It was created by Joshua Davis with Adobe Flash Professional CS5 using the ActionScript HYPE visual framework deployed via Adobe Flash Player 10.1. The avatar is connected to Watson via an XML socket server, which sends information about the computer’s current mood or state, such as “I know the answer”, “I won the buzz”, etc. The avatar also receives audio input from Watson’s voice by analyzing audio from the microphone. 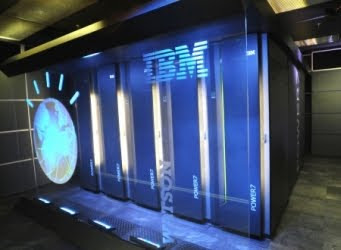 IBM Watson is built on a massively parallel supercomputer. The hardware configuration consists of a room-sized system, about the size of 10 refrigerators: 10 racks containing 90 IBM Power 750 server clusters connected over a 10 Gb Ethernet. Each Power 750 contains 4 chips and 32 cores, and is supposedly the world's fastest processor. IBM Watson has a total of 360 computer chips and 2,880 processor cores. It has 15 terabytes of RAM, and a total data repository of 4 terabytes, consisting of two 2 terabyte (TB) I/O nodes. IBM Watson operates at some 80 teraFLOPS, or 80 trillion operations per second. (For comparison, both IBM Blue Gene and the AFRL Condor Cluster operate at some 500 teraFLOPS.)
Many sources, including the Wall Street Journal, are claiming Watson's 4 terabytes (TB) of storage contains some 200 million "pages" of content. Wired claimed only 2 million pages of data for Watson. 1TB (or 1,024GB) is roughly equivalent to the number of books in a large library (or about 1,610 CDs). Large municipal libraries may contain an average of 10,000 volumes. So, if a book averaged say 200 pages, then Watson should contain closer to something like 8 million pages of content. Content sources include unstructured text, semistructured text, and triplestores.
Watson's software configuration consists basically of SUSE Linux Enterprise Server 11, Apache Hadoop, and UIMA-AS. SUSE Linux Enterprise Server 11 is a Linux distribution supplied by Novell and targeted at the business market. Apache Hadoop is a software framework that supports data-intensive distributed applications, including an open source version of MapReduce, enabling applications to work with thousands of nodes and petabytes of data. UIMA-AS (Unstructured Information Management Architecture - Asynchronous Scaleout) is an add-on scaleout framework supporting flexible scaleout with Java Message Service. Hadoop facilitates Watson's massively parallel probabilistic evidence-based architecture by distributing it over the thousands of processor cores.
The DeepQA architecture has three layers: natural language processing (NLP), knowledge representation and reasoning (KRR), and machine learning (ML). The IBM Watson team used every trick in the book for DeepQA; apparently they couldn't decide which natural language processing techniques to use, so just used them all. Each one of Watson's 2,880 processor cores can be used like an individual computer, enabling Watson to run hundreds if not thousands of processes simultaneously. For instance, each processor thread could host a separate search. All the hundreds of components in DeepQA are implemented as UIMA annotators. The internal communications among processes is handled in UIMA by OpenJMS, an open source version of Java Message Service. The IBM Content Analytics product LanguageWare is used in Watson for natural language processing. According to David Ferrucci, Watson contains "about a million lines of new code". 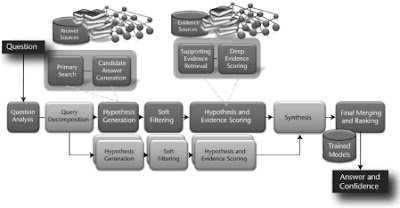 Ferrucci D. Build Watson: an overview of DeepQA for the Jeopardy! challenge. In: Proceedings of the 19th international conference on Parallel architectures and compilation techniques.; 2010:1-2.

Ferrucci D, Grossman RL, Levas A. PMML and UIMA based frameworks for deploying analytic applications and services. In: Proceedings of the 4th international workshop on Data mining standards, services and platforms.; 2006:14-26.

Well, you certainly have your work cut out for you, but it seems to me that you are on a promising track. Having worked in doctoral linguistics and Semetic languages with S A Kaufman at Hebrew Union College in Cincinnati and in two other doctoral programs at the U of So. Africa, I applaud what you are attempting to accomplish. I pray that you accomplish your goals.
Dr,.W J Evans Jr (PhD, DTh, PhD)

I've written a "biography" of Watson, Final Jeopardy-Man vs Machine and the Quest to Know Everything. The partial ebook comes out on Jan 26.

One point about Watson's data storage. According to David Ferrucci, Watson stores only about 75 gigabytes of documents. There are two Watsons, a slower one for development and a speedy one for the games. In the speedy version, those 75 gbs are semi processed for the machine to read through them faster. That increases the data load to 500 gbs. --Stephen Baker

Thanks for a fascinating post. I knew when I heard the on air promos that I'd heard Watson's voice before, but I just couldn't place it!

When I read your post I went to Audible.com, searched for Jeff Woodman, found over a hundred samples from his audiobooks, and after listening to 3 or 4 of them it became obvious to me that Woodman is Watson.

Did IBM feed a bunch of his audiobooks into a program to get enough vocal samples to have Watson speak in his voice? And is that kosher?

Hi,
You show a diagram of the extraction pipeline "Processing steps" in your bog. Could you tell from which of the references papers the diagram is taken from if at all?
Best Regards

Harry, you can find the original diagram in the referenced paper, "Building Watson: An Overview of the DeepQA Project", which you can now see online in HTML, entitled "The AI Behind Watson - The Technical Article", at: